The Cathedral of Como, or Duomo di Como, took nearly four centuries to build before its completion in 1740. As a result, the striking building blends hundreds of years of styles, as well as the influences and inflections of copious artists and skilled craftsmen.

Construction began in 1396 on the ancient Romanesque basilica of Santa Maria Maggiore, the church which the Duomo was due to replace. The building stages were twofold, with the first seeing a cohabitation between the church and the new cathedral, before the church was slowly demolished from the 15th century onwards, with only the south flank backbone remaining. Architects such as Lorenzo degli Spazzi and Pietro da Breggia began work on this marvel, before men such as Florio da Bonta took over in later stages of its development.

The marble gothic façade of the dome was finally realised in 1740, the year that the cathedral was finished. Yet the rose window itself was designed by a combination of Luchino Scarabota, Amuzio da Lugano and Tommaso Rodari da Maroggia, as the façade actually took 50 years to erect, from 1447-1498. The window is winged by two statues of the sons of Como, Plinio il Vecchio and Plinio il Giovane (Pliny the Elder and Pliny the Younger respectively), these famous men of letters were civil employees of the Roman Emplire and born in the first century A.D. in Como; despite being pagans they have been honoured with this prestigious position in the cathedral.

Via Maestri Comacini 6
Como 22100 Lombardia IT
Get directions 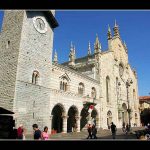