Cyclists will find their niche at the Ghisallo Cycling Museum in Como. It’s no coincidence that the museum is situated on the beautiful Madonna del Ghisallo peak, as this famous hill is intrinsically linked to the history of cycling. The iconic location is home to the 17th century shrine of Madonna de Ghisallo, who was deemed the patroness of cycling by Pope Puis XII. The previous year, the Pope had lit and blessed the bronze eternal flame which still burns inside the shrine. The shrine’s history has been well preserved, as in 2000 the Foundation of the Ghisallo Museum organised a relay from Madonna del Ghisallo to the Vatican to deliver a torch of the eternal flame to Holy Father John Paul II. In fact, it was this gesture which went on to inspire the idea for the creation of the museum, which helps to preserve the shrine’s heritage; consequently the museum was opened in 2006.

The climb to the hill’s peak has been the conclusive point of many reputed cycling races, including Giro d’Italia, Giro di Lombardia, Coppa Agostini and Giornata della Bicicletta. If you fancy a spot of training, it’s well worth riding up to the museum yourself, to truly know what it feels like to be part of a world renowned cycling course. In fact, for three years ‘Lombardia’s Tour’ has been chosen as the last race of the World Cup and even if the route has been altered slightly, it always includes Ghisallo. Throughout the year, both competitive and leisure cyclists ascend the peak, suggesting the route has become a badge of honour in cycling spheres.

Via Adua
Magreglio 22030 Lombardia IT
Get directions 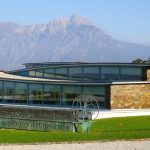