The Teatro Sociale in Como has recently celebrated its 200th birthday after a busy history of closures, extensions and world-class performance. Initially built in 1813, the theatre was designed by Guiseppe Cusi after locals decided that the existing theatre looked too outdated. Teatro Sociale was built on the site of a ruined medieval castle, Torre Rotondo and the Società dei Palchhesttisti was created so that subscription fees could fund the creation of the new theatre. The exquisite neoclassical façade was planned well in advance of the build and the theatre was eventually inaugurated with the performance of Marco Antonio Portogallo’s opera, Adriano in Syria.

Throughout its existence the theatre has faced adjustment and extension, with 38 new boxes being added to the auditorium in 1854 and a further house extension in 1910. In the 1930s the theatre even became a cinema for a little while and in 1944 the Teatro Sociale functioned as an alternative opera house from Milan’s La Scala. The theatre is home to world-class opera and has hosted fine performers including Paganini, Giuditta Pasta and Francesco Tamagno. The theatre is currently celebrating the life and work of the famous composer Giuseppe Verdi.

Teatro Sociale’s structure is beautifully impressive. Six Corinthian columns anchor the intricate yet powerful façade and inside the theatre manages to marry a regal operatic air with warm intimacy.
The cello case-shaped auditorium is jewelled with plush red velvet seats and delicate lamps illuminate the sculpted cream interiors. The painting, by Eleuterio Pagliano, on the roof vault represents the Muses coming down from Olympus to crown the artists. Meanwhile the historical curtains depicting Plinio il Vecchio’s death during Mount Vesuvius’ eruption are the artwork of Alessandro Sanquirico. As you enter the theatre you are immersed into an era of timeless grandeur and classical elegance. Grand tours of the theatre are available.

Via Vincenzo Bellini 3
Como 22100 Lombardia IT
Get directions 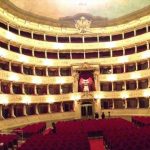