Villa Carlotta is a magnificent museum and botanical garden near Tremezzo, Lake Como. The villa which was built during the late 17th century by Milanese marquis Giorgio Clerici was finally completed in 1690. The statuesque building lies in a natural basin between the lake and mountains, facing dolomite Grignas and the peninsula of Bellagio. Villa Carlotta fuses nature and art across 70,000 square metres of gardens and museums, giving visitors a terrific taste of Como culture in a rural setting. The neoclassical villa stands above three terraces linked to the lake along the central axis by a series of double stairways with imposing balustrades.

The extensive Italian gardens surrounding the villa are ornately scattered with sculptures, stairs and fountains. Although you cannot take photos inside the villa, you are welcome to capture a myriad of arty shots in this beautiful outdoor metropolis. It is advisable to give yourself at least a couple of hours to explore the full perimeters of the grounds!

The history of Villa Carlotta is one of passion and enhancement. In 1801 Gian Battista Sommariva, a famous politician, businessman and patron of arts, bought the villa and honed it into the most prestigious passing point of the Grand Tour, by evolving it into a sanctuary of 14th century art. The exhibition includes the works of Canova, Throvalsden and Hayez with pieces such as Eros and Psyche and The Last Kiss of Romeo and Juliet on display. It is also credit to Sommariva that part of the park was transformed into a clandestine romantic garden. The villa was later sold to Princess Marianne of Nassau, Albert of Prussia’s wife, in 1843. Marianne gave the villa to her daughter Carlotta as a wedding present, hence its name. George II of Saxen-Meiningen, Carlotta’s husband, was deeply interested in botanicals and cultivated the beautiful rhododendrons’ and azaleas’ spring flowering which the garden is admired for today. Over 150 different species of flowers and trees, including palms, eucalyptus and magnolias, pepper the garden and although spring offers the most beautiful blossom, the parks are lovely all year round. When visiting the park you can expect to see old varieties of camellias, century old cedars and sequoias, huge planes, tropical plants, the Rock Garden and Ferns Valley, Rhododendrons Wood and Bamboo Garden. You can then wander down for an educational tour of the Agricultural Tools Museum before reclining by the tranquil lakeside.

Via Regina 2B
22019 Lombardia IT
Get directions 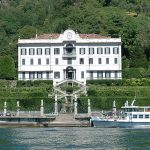